I can barely believe that back in August I was told there was a 90% chance my BONE WOULD DIE and I’d likely have fusion surgery and it would be all dramatic and terrifying and I wouldn’t walk again and my whole life would change and and and Breaaaaaathe.

It’s almost 6 months on – already! – and I’m pretty happy getting up stairs (getting down them is still a bit of a weird one), I’ve done some gentle limpy jogging, I’ve joined the deadlift gang at the gym, and I can catch my body weight with one hand on a climb now (I could never do that before the fall).

There’s no sign of bone death. My walking is pretty much the same as it used to be. NICE.

Despite everything being a thousand times more positive than originally thought, I’m still facing some climbing roadblocks. So my ankle just doesn’t really bend anymore, and my NHS physio is awesome but it doesn’t look that hopeful that I’ll be recovering that movement any time soon or at all. An option may be more surgery this or next year which could help.

Whatever happens, it can be a little frustrating knowing what move I need to make but literally not being able to bend my ankle the way I want it to go.

It probably doesn’t help that I mostly climb with people who are waaaaay more experienced than me, which can often leave me feeling a bit inadequate when we get to the wall.

So it’s this big mix of a “I’m not as good as anybody else” feeling (which needs to be shaken because it’s all built on ego and doesn’t serve me) and a literal inability to actually do certain moves.

I’M REALLY REALLY SCARED OF FALLING. Which is, I guess, natural. People get it lead climbing all the time. But, I get it toproping, I get it bouldering (which really is sensible seeing as I still shouldn’t be falling on my ankle from a height – snappety snap snap), and I really get it lead climbing.

Recovery is equal parts amazing and the worst

And I think, that given the choice, after all the amazing things that have happened since the fall, I would probably snap that bone in half all over again. 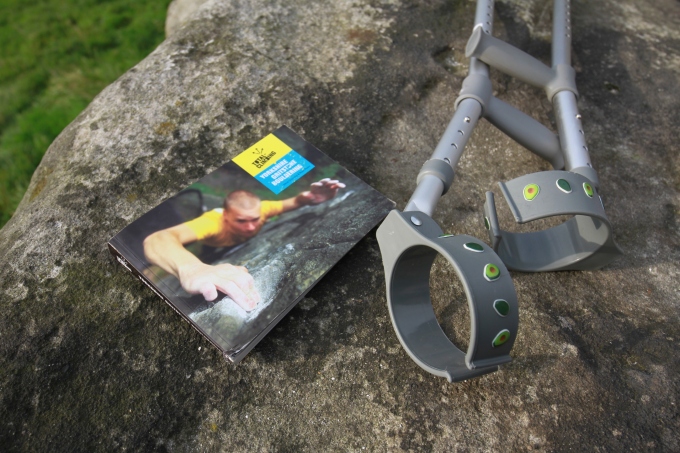 After being told my ankle would likely be completely fused together and would never move again at all, I’m feeling pretty lucky. Every time I visit the physio he batters my ankle with an agonising massage but also reminds me that the ankle was literally just shattered, and it’s amazing I started climbing again so soon.

I’ve had to work on my upper body so much more since not relying on my legs, so I’ve gotten so much stronger.

But, I constantly kick the wall and have ruined my right shoe completely.  I can’t afford to replace it (them) right now.

BUT, fuck it. Injury is just another thing to work through, to find a solution around. And I think, that given the choice, after all the amazing things that have happened since the fall, I would probably snap that bone in half all over again.

Have any of you had climbing injuries that have caused issues?