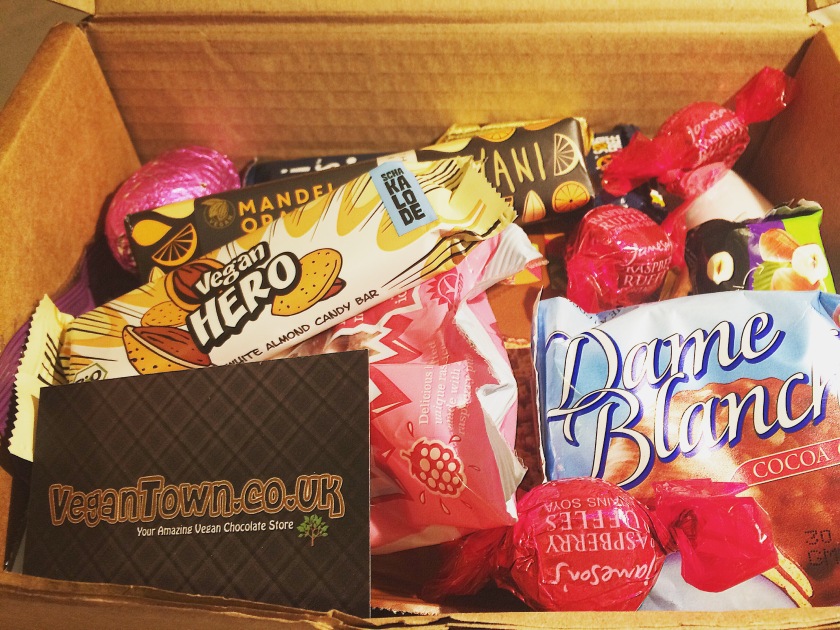 A guide to Vegan Christmas, ish. Things to buy your vegans for next year, things to eat and make for next Christmas, or just in general, as a vegan. Also a little bit about my 2 day long Christmas and how cute and happy and chill it was. 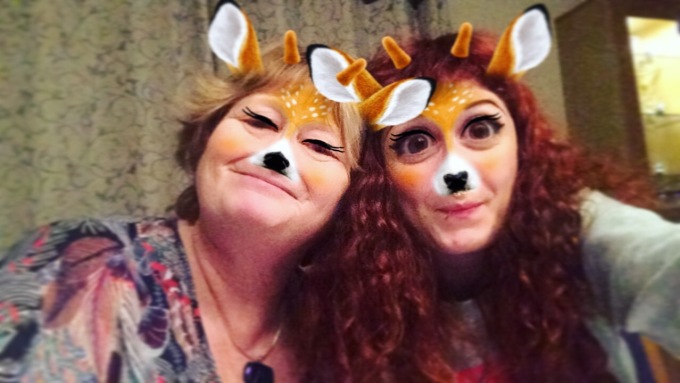 After living on crisps, avocado and ‘vegan trash’ food (as my colleagues lovingly called it) for the past month, Christmas was an excitable overindulgence this year to the point I keep looking at all my food and going “but…but I just can’t eat it.” And when I say Vegan Christmas, I mean I was still the only Vegan amongst my carnist family, but it was Christmas, there were no jokes about dead animals, and all of my presents were pretty rad and ethical. So tomatoes, potatoes, it was a Vegan Christmas, kind of. 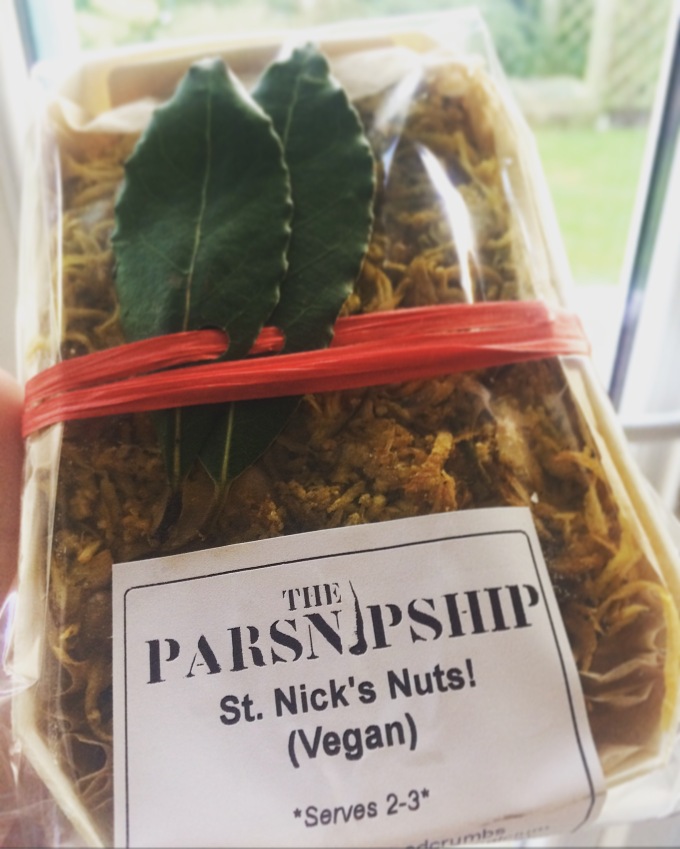 This nut roast was my main this year. Who said Vegans don’t have a sense of humour? I have since asked the Parsnipship if their pun was intentional, and I have not received a reply yet. My Christmas Day food was frickin’ amazing! Mum made veggies, I made cauliflower cheese (which I am really super proud of) using a thousand different cheeses and this sauce from Holland and Barrett.

Pro tip: use Sainsbury’s Gary as the main cheese and garnish with the rest. If you’re grumbling about my privilege (because yes I am really lucky my mum ordered me food in), Linda McCartney pies are amazing as a main and you can grab them pretty much anywhere. And a ton of gravy brands are just naturally vegan. Also – dessert. Mum felt guilty because I didn’t have one, then she went ahead and whipped up an apple and blueberry crumble in about a second. Goddess.

So much chocolate, I’m going to die

I keep looking at my Vegantown box and getting so excited at the amount of chocolate and sweets I have to last me. Life is good when you have vegan chocolate that isn’t just dark chocolate (I have a real sweet tooth that 90% can’t satisfy, alright?). My mum also NEVER fails getting me these fondant chocolates which are ridiculously cheap and apparently from… the local garden centre?

BWC wins this year, being an entirely vegan and cruelty-free brand. I’d wanted to buy the Mascara for ages, but Santa in the form of my best friend’s mum got me some instead. Thanks Liz.

Limecrime I’ve generally stayed away from after hearing vaguely about some scandal, and also because their cosmetics are a little expensive, and tricky to source. But my sister came through and I’m now blessed with this rad-packaged, beautifully scented metallic lipstick. (I’ve stuck by my Lush lipstick love for some time, but have always been upset at the packaging issues – i.e. it sucks). And speaking of Lush, now I’ve left I can finally paint my nails with my brand new Barry M polishes without it coming off 0.00004 seconds into my shift. Careful though, not everything Barry M makes is Vegan, though it is ‘cruelty-free’ (let’s not get into that dissonance, today).

Probably the most ethical out of all of us (including me!) this year was my oldest sister. In my last-minute Christmas buying, I ended up at larger chain retailers and, though everything I bought was vegan, was it entirely ethical? Probably not. My sister brought back some floral leggings and a handmade yoga bag from Bali and they are absolutely gorgeous (and a guilt trip because I haven’t done yoga properly in a week noooOOOOOoooooo)! I would love to spend as much as my money as possible at smaller, independent retailers this 2017, I would recommend everybody else to try, too. Sainsbury’s man, why’s your Gary gotta be so good?

Remember the Adventures ahead 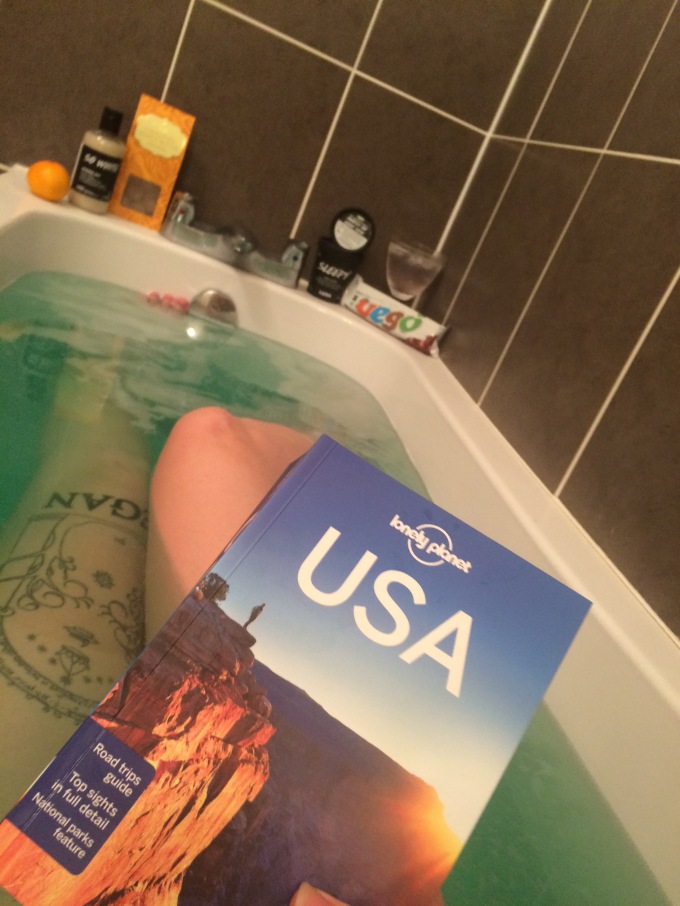 Gigi was sneaky and got me a Lonely Planet for the US, which I’ve already been reading avidly, turning down page corners and seeking out veggie recommendations. Sense tells me to slow down, find a job first, get somewhere to live, save some money. Excitement and my ridiculous habit for spontaneity tells me to PLAN THE EXCITING THINGS IMMEDIATELY AND FUCK EVERYTHING ELSE. I’ll settle for a balance.

Even if I hadn’t have been so fortunate, there’s a ton of roast dinner and dessert yums out there that are cheap and easy to make. Some just pop-in-the-oven kind of easy. Vegan Christmas is easy, even amongst a very Yorkshire family with meat-eating at its centre. Maybe that was just because my parents plugged in one of those ‘pet relaxation’ things and and I was less militant than usual as it’s affected me too because of my fragile vegan disposition. I don’t know. Happy holidays cuties.