Across the road from city square, I hurriedly scribbled in my notebook: a few final touches on my anti-Tory, Fox ally, poem, to be read later after the march around Leeds city center. Conor and I could already see a ton of people gathered, police milling in and around the crowd. It was sunny but, for a day forecasted thunderstorms, we were pretty impressed at the turnout.

What’s the deal with this Ban thing?

If you didn’t already know, the Tories are planning on repealing the 2005 Hunting Act . In a society plagued with issues from homelessness to our current healthcare crisis, the fact that re-legalising Fox Hunting is even being considered in the current climate tells us a lot about the priorities of a Conservative government.

Since 2005, fox hunting has been illegal in the UK. However, the privileged elite have been getting away with donning their outdated red coats and going out on hunts anyway. The ban is barely enforced, and it’s often left to The Hunt Saboteurs to protect foxes as much as they can, which often results in them being verbally and physically attacked by angry hunters. Injuries range from being hit by whips and batons (and lengths of chain!?), to being run down by horses. Prosecutions for these attacks (even when caught on film) are rare.

The ‘humane’ way… or not 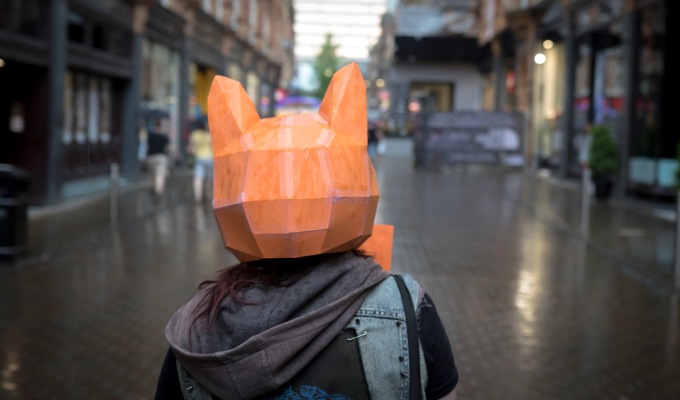 No. Snaring is not humane. Shooting foxes is not humane. And, hunting is also not humane, for all animals involved. Hunting hounds often have a poor quality of life, and, as they are bred to be vicious, are killed when they are no longer useful to the hunt. As for the foxes themselves, it has been proven time and time again in numerous studies that population culls are ineffective, and that foxes actually have a positive impact on farmers economically, due to their effectiveness at keeping rabbit populations down. If we were to talk about a real solution to foxes stealing the animals in farms (which is rare, due to the fact they largely eat carrion), it wouldn’t be to just shoot or snare them, as new foxes would eventually just move into uninhabited territory. Farmers must, instead, look at their security. (Or, just stop breeding animals to murder and grow crops instead…)

It needs strengthening, not repealing

Fox hunting is an outdated and cruel tradition, with absolutely no place in our current society. The ban certainly does need looking at – as in, those who participate in these Blood Sports should actually be prosecuted for their murder of animals and assault of Hunt Sabs. We shouldn’t have to rely on volunteers who are constantly putting themselves in danger, we should be living in a society where those who kill animals for fun are condemned. So we’ll keep marching, whether it’s blue skies or thunderstorms.

And… there was a thunderstorm. 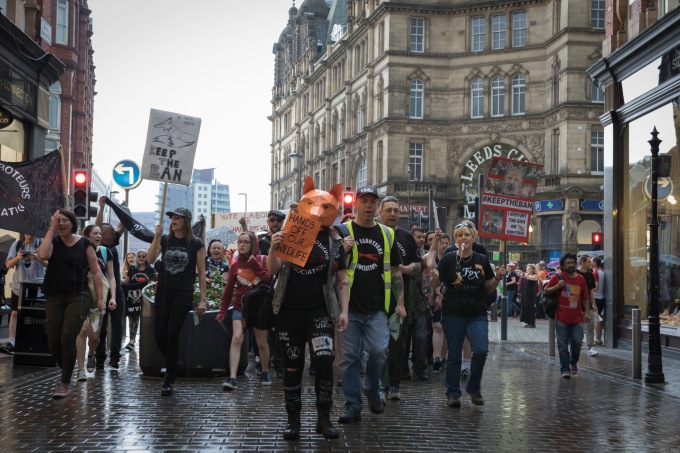 Milling around city square, it was glorious sunshine. Then, a few practices of the march chants (“shame, shame, shame on May, leave our foxes alone today!”), a cheer, and off we went! Two minutes later – absolute downpour. Like, that kind of rain that bounces off the pavement with such force it splashes back in your face kind of rain. Onlookers huddled in pub entrances and under bus stops, some videoing, some clapping and smiling, and a minority stoney-faced. I handed out leaflets (which were growing more and more soggy by the second), and shouted until my voice began breaking. This was a protest borne of love for our wildlife, of frustration, and a celebration of community. So, honestly, we couldn’t give a fuck about the fact we were soaked to the bone.

Since leaving Oxford, I’ve been feeling a little lost in the activist space. And so, being in the center of Leeds surrounded by other passionate Northerners made me feel at home again; I can’t wait to get involved more, to join a collective of people who stand up and take action, and to feel part of a community again.

Saturday’s march was organised and lead by The West Yorkshire branch of The Hunt Saboteurs. The group, operating across the UK, have been protecting British wildlife from Bloodsports for over 50 years, going out into the field, tackling hunters face to face.

We are experienced in using non-violent direct action tactics to save the lives of thousands of hunted animals every season. From using hunting horns and voice calls to run off with the hounds at foxhunts, to standing in front of the shooting butts on the grouse moors, to wading through the rivers at minkhunts, wherever animals are being hunted for fun, hunt saboteurs will be there.

The Sabs spend their time, money, and full energy into doing this job, and are completely donation based. They save thousands of animals a year, and can only continue doing so with more people power!

If you want to get involved with the Hunt Saboteurs, please do!   If you’re interested in donation or volunteering, give them a shout!